OK, for some reasons, I write this article in English. I bet you Chinese can understand it.

The problem was simple. Globat's servers got down on Feb. 21, because of switch problem. Well, that was not the critical impact.

On Feb 23 afternoon, I found my database got problem, probably database crashed. I talked to their technical support. They told me they were working on it, and needed sometime. I thought it was acceptable. But then, things got much worse.

On Feb 23 evening, the database was still down. Technical support suggested me to issue a ticket. I did. Then, I still hoped it would be better.

On Feb 23 night, I got the first (and the only) response to that ticket. It was said they were taking care my issue.

On Feb 24, they told me they had fixed the problem. But again, my database was still reporting errors. Then, they changed to another word, saying they were trying to fix the problem.

On Feb 25, the problem was still hanging my websites. They were still saying to fix it.

On Feb 26, they told me, hopefully, they would fix the problem by both recovering from previous backup and fixing existing database. I got confused and totally lost my patience.

On Feb 27, I tried use phpMyAdmin to repair tables, and got all tables recovered except one of them. Finally, I got a happy ending by myself. Definitely, they were still "fixing the problem".

As of that time, all my websites have been down for almost a week. Those websites include, snailium.net, blue-dv.net and sdfzlt.cn.

I tried to search "Globat problems" in Google. It seems Globat has problem to deal with customers frequently. I have no more passion on a troublesome web server. Therefore, I temporarily moved to Lunarpages, under xiaoqiangnet.com. 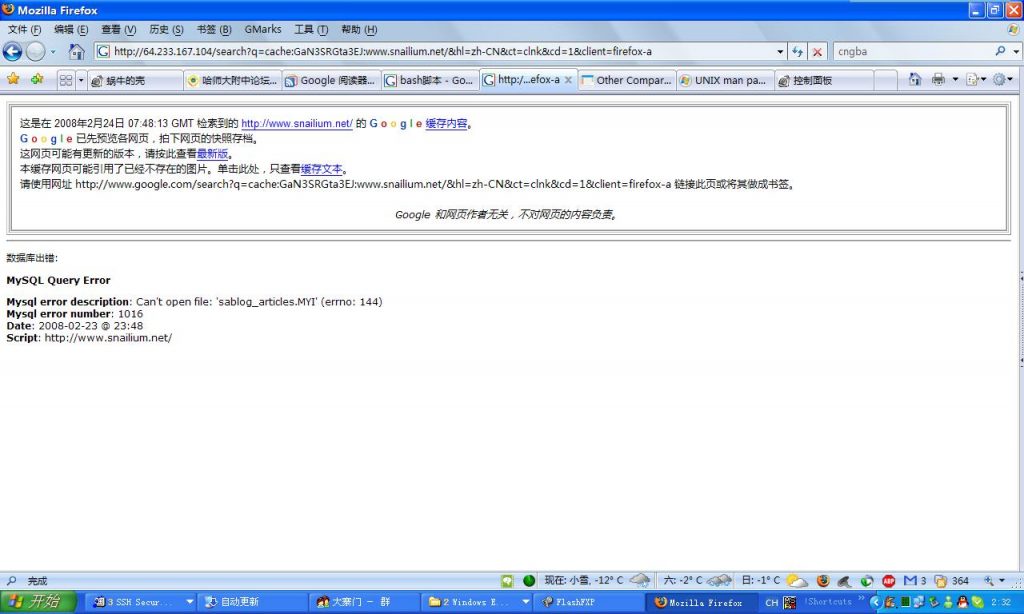 Further, I will shut down all my websites on Globat and move them all to a new server, although they are still fixing the problem.